It's a big duty for a graduation speaker to get up on stage and preach their words of wisdom to the graduating class. They must do this while not being boring, being part funny, and being inspirational to the listeners.

While being "funny" during a speech is not necessarily a requirement, you will usually find the speaker cracking a joke or two at the beginning of the speech to loosen up both the speaker and the audience.

It can be hard to keep an audience's attention for 10-20 minutes, especially with the graduates, who probably have a million thoughts running through their heads and are sweating to death in their graduation gowns.

Typically, a commencement speaker will include a parable in their speech and follow it up with some motivational words of advice for the graduates' future and career.

After analyzing several college graduation speeches, we have collected this list of highly motivational commencement speeches.

Steve Jobs gives a pretty serious speech to Stanford graduates about his life; from getting fired from Apple in 1985 to his near death experience from cancer.

Your time is limited, so don't waste it living someone else's life. Don't be trapped by dogma — which is living with the results of other people's thinking. Don't let the noise of others' opinions drown out your own inner voice. And most important, have the courage to follow your heart and intuition. They somehow already know what you truly want to become. Everything else is secondary.

Harry Potter author J.K. Rowling spoke to Harvard graduates on June 5, 2008. The speech is a bit long (about 20 minutes total), but so inspiring. She even throws in a few inside jokes for all you readers of Harry Potter books. Rowling covers the importance of imagination, overcoming poverty and failure, and the roles they play in success.

If you choose to use your status and influence to raise your voice on behalf of those who have no voice; if you choose to identify not only with the powerful, but with the powerless; if you retain the ability to imagine yourself into the lives of those who do not have your advantages, then it will not only be your proud families who celebrate your existence, but thousands and millions of people whose reality you have helped change. We do not need magic to change the world, we carry all the power we need inside ourselves already: we have the power to imagine better.

Author Barbara Kingsolver shares her advice on how to live a full and happy life with her speech, “Your Money or Your Life”. If you find the time, you should definitely read the speech all the way through.

You will be told to buy into business as usual: You need a job. Trade your future for an entry-level position. Do what we did; preserve a profitable climate for manufacture and consumption, at any cost. Even at the cost of the other climate – the one that was hospitable to life as we knew it. Is anyone thinking this through? In the awful moment when someone demands at gunpoint, “Your money or your life,” that’s not supposed to be a hard question.

Randy Pausch was a professor of computer science at Carnegie Mellon. He was told he would only have 3-6 months left to live due to pancreatic cancer... he gave this speech on month nine. Pausch passed away just over 2 months after he gave this speech.

We don't beat the reaper by living longer, but by living well, and living fully — for the reaper will come for all of us. The question is: what do we do between the time we're born and the time he shows up.

Conan pretty much tells his life story, from starting out after graduating from Harvard and taking a job at Wilson's House of Suede and Leather, to landing the spot as the host of the late night talk show. His main point is to go out there and take chances; don't be afraid of failure.

So, that's what I wish for all of you: the bad as well as the good. Fall down, make a mess, break something occasionally. And remember that the story is never over.

Although this speech from Steven Colbert is quite humorous, it's also quite motivational.

You are about to start the greatest improvisation of all. With no script. No idea what's going to happen, often with people and places you have never seen before. And you are not in control. So say "yes." And if you're lucky, you'll find people who will say "yes" back.

American columnist and author Russell Baker presents his speech: “10 Ways to Avoid Mucking Up the World Any Worse Than It Already Is.”

So when you get out there in the world, ladies and gentlemen, you're going to find yourself surrounded by shouting, red-in-the-face, stomping-mad politicians, radio yakmeisters and, yes sad to say, newspaper columnists, telling you 'you never had it so bad' and otherwise trying to spoil your day. When they come at you with that, ladies and gentlemen, give them a wink and a smile and a good view of your departing back. And as you stroll away, bend down to smell a flower.

This speech is a great read for future entrepreneurs. It was given at Babson College, who has one of the best entrepreneurship programs in the country.

Playing to win is one of the finest things you can do. It enables you to fulfill your potential. It enables you to improve the world and, conveniently, develop high expectations for everyone else too. And what if you lose? Just make sure you lose while trying something grand. The unexamined life may not be worth living, but the unlived life is not worth examining. Make sure your life is worth examining. 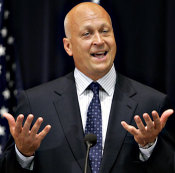 You will rarely find someone with as much heart, soul, and dedication as former baseball player Cal Ripken Jr. He holds the record for the most consecutive games played, a feat that requires much love and passion for what he does. Although he never went to college himself, he offers some great advice to live by.

As you meet those challenges, I hope you will think about three ideas which have guided me along the path that my life has taken thus far, and which may take some of the apprehension out of the choices you make. First, find a career that is your passion. Second, persevere to be the best you can be as you perform your tasks. And, third, strive to be a good person in all you do.