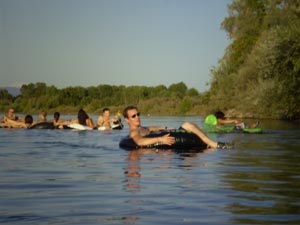 Every year during Labor Day weekend, many college students get together and float the Sacramento River at Chico, CA. Most of the people that show up to the annual event attend Chico State, but others come from all over California, and a few even from a state or two away.

The Labor Day weekend Chico float is a long standing college tradition. In the past, as many as 25,000 floaters have showed up to float the river, which ends up being a beach party at the end of the run. This beach, known as “Beer Can Beach”, is where the party ensues, with lots of drinking, music, and the typical girl going wild. The party continues until the sun starts to go down and things start getting a little chilly after a long day of floating. This event alone is one of the reasons Chico State has always been considered one of the best party schools. 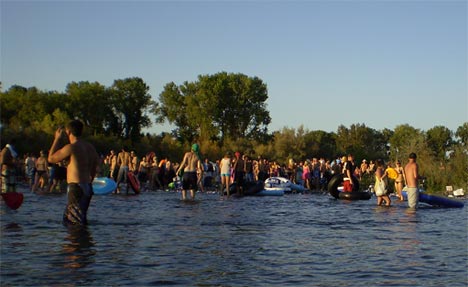 Over the past couple year’s things have died down a bit, as cops cracked down on college students getting too drunk. DUI checkpoints were even used in previous years to ensure all were abiding the laws of driving.

This year’s annual event showed things were back in full swing though, as nearly 10,000 people showed up on Sunday over Labor Day weekend. The traditional day to do the river run was actually Labor Day on Monday, but things seem to be trending toward Sunday as being the main day to float. Sure, you will find floaters on all three days of the weekend, but less partying seems to take place on Monday as most college students are partied out and are preparing for school the next day and/or recovering.

The river provides free entertainment to revelers, as floating the river doesn’t cost anything and is something that is fun and won’t hurt the budget of a typical college student.

The inner tube was the floatation device of choice, though a few show up with air mattresses, river rafts, and even an inflatable pirate ship.

No serious incidents were reported by police this year, and only a few arrests were made. People seemed more relaxed and chill, just looking to have a good time. The police understood this, and for the most part, let people have their good time without interfering too much. They were mainly there as a safety precaution, as floating a major river and drinking are usually not a good combination. They even had a chopper patrolling the waters from above. The cops were still around in good numbers, but they were there to help. They were cool with everything, as open containers are allowed while floating on the river as long as you are of age and your beers are in cans.

If you're in the area, be sure to check out next year's river float in Chico, California on Labor Day weekend.

Directions to the Chico Float

A lot of people have been asking for directions to the Chico Labor Day float.

The big float for this year is set for Sunday, September 2nd.

Last year, even though there was a threat of an alcohol ban, turned out to be a great time. Also, just wanted to send out a special thanks to Kelli, Barrett, and Kendall for helping out with a ride out to the float last year…owe you big time!

It will be interesting to see the turnout for the 2014 Chico Labor Day float after the Chico tradition was listed among the greatest college traditions in America.