Traditions are how college memories will be formed. Take them away, student satisfaction goes down and you have thousands of unhappy students paying $50K a year to go to school.

Limiting the amount of fun college students are allowed to have is kind of like prohibition; it doesn’t work. To keep their sanity, students need time to blow off steam with something away from the monotony of studying.

Traditions provide a sense of community on a campus with thousands of students. Without this feeling of belongingness, students begin to feel lost in the crowd and can end up transferring or even dropping out. These traditions mean a lot to students and alumni and to ban them outright leaves an empty void in the school spirit of every student.

As a follow-up to our recent ranking of college traditions, we’d like to showcase some of these historic traditions that would have been included in the list, had they not been banned by college administrators. Here are 10 traditions worth reviving. 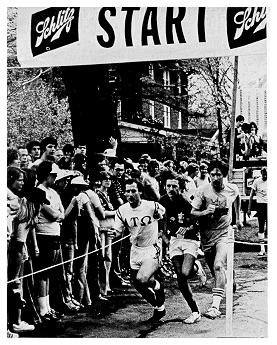 Penn State’s Phi Psi 500 began in the late 1960s and was a spring tradition that lasted for 25 years. The 1.1 mile foot race through the streets of downtown State College required 6 pit stops at designated bars along the course where runners had to chug either a beer or soda. It was a heavily anticipated spring event by both students and alumni, drawing about 1500 runners every year.

While the runners who took the race serious ran in the morning, the highlight of the event was the “Anything Goes” division where large groups of students would dress in costume, turning the race into a festive parade. At its peak, sidewalks were four to five people deep as 20,000-30,000 spectators turned out for the charity event.

The university later cracked down on the yearly tradition, removing beer from the festivities. The final Phi Psi 500 was seen in 1992. Here’s a video from the 1982 race, where more than 1,400 runners participated.

For years, students at University of Colorado Boulder held an annual festive 4/20 celebration that brought together over 10,000 people to the campus quad. The university was so adamant about shutting down this tradition that they covered the quad with a pungent fish-based fertilizer to deter the crowds in 2012. Security is now brought in on 4/20 to keep non-students off campus and to block off the quad where the tradition typically takes place. With Colorado's recreational marijuana legalization coming into effect, this former tradition is just waiting to be resurrected. 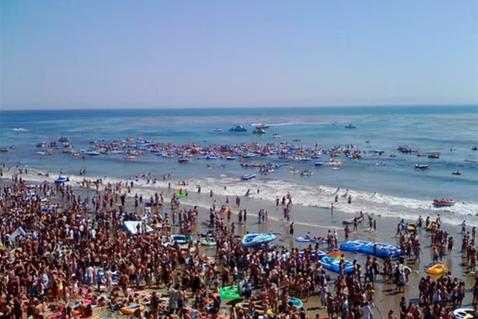 Floatopia was a spring tradition at UC Santa Barbara for a handful of years before it was shut down by authorities. Thousands of students would descend upon the beach near campus with their inflatable rafts and beverages of choice and float out to the large gathering of rafts offshore. As the event grew and started drawing college students from all over California, Floatopia saw its grand finale in 2009 when as many as 12,000 attended the beach party. In the following years, authorities blocked off access to the beach thereby ending the tradition. Floatopia morphed into what is now known as Deltopia (#35 on the list of greatest traditions), where students engage in a block party on the street overlooking the beach that they were forbidden to go on.

Pioneer Days was a week-long Old West festival that took over the town of Chico, CA the first weekend in May. The tradition got its western influence when students formed a Whiskerino Club in 1925 and proceeded to dress in old west clothing and grow beards for the event.

Greeks and other organizations spent months preparing for their cherished spring celebration coordinating for the big parade, organizing Quad projects, prepping for Sweepstakes competition and Sheriff & Little Nell elections, on top of the big parties and shows that went on during the week.

In 1987 Playboy Magazine named Chico State the best party school in the nation. A big reason for that was Pioneer Days, which was receiving national attention for its boisterous atmosphere on MTV and other news outlets. The publicity put the small town of Chico in the spotlight and drew thousands of out-of-town visitors to the event.

After the news came out that Chico State was the place to party, University President Robin Wilson met with city officials with the goal of ending the reputation by shutting down parties using police force. On April 25, 1987 police riots broke out just before the Pioneer Days celebration and President Wilson announced an end to the 70-year-old tradition, saying he took Pioneer Days "out back and shot it in the head."

As early as 1898, University of Virginia students celebrated Easter Week or "Easters." UVA, an all-male school at the time, set aside the week for a series of formal dances, hosting coeds from various women’s colleges in the area. (The college was not fully co-educational until the Class of 1976 arrived in 1972.)

In the 1960s, the fraternities became more involved in the event by hosting bands and parties in their houses. As the Easters celebration continued to expand over the years, thousands of students all over the East Coast began making the trip to UVA to celebrate what Playboy magazine called “the best party in America.”

"It was the experience of a lifetime, rivaling Woodstock, but in a collegiate way!"

Mud and alcohol was a big part of the Easters celebration. In the early 70s, students used fire hydrants to pump water into the Madison Bowl and the yards of fraternity houses to create large mud pits. The mud eventually found its way into the dorms and clogged up shower drains, flooding entire floors.

At its peak, an estimated 15,000 people packed the Mad Bowl in 1976 for the annual Easters tradition. After lasting nearly 100 years, the final Easters celebration was seen in 1982 when 7,000 people consumed over 200 kegs of beer within four hours. Easters had become too popular and out of control, according to the administration.

There was an effort to bring back the tradition the following year when the Inter-Fraternity Council created t-shirts in favor of reviving Easters, however, the movement failed to catch on. Following the cancelation, no major UVA events were scheduled in the spring as the administration feared the Easters tradition would come back. Now students blow off steam during Foxfields, an off-campus spring event receiving honorable mention in our 100 Greatest College Traditions list. 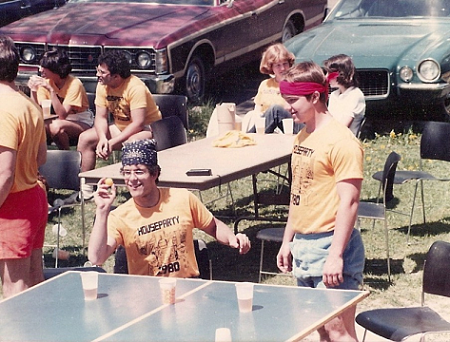 Some say the game of beer pong originated at Bucknell. Photo by Michael Minor

House Party Weekend was a longtime tradition at Bucknell University. Students, along with their guests and alumni, would buy a wristband good for the entire weekend giving them access to dozens of parties on campus. The 72-hour celebration featured live bands, free food, BBQs, and all the alcohol one can consume. Food was served and prepared by the deans and a party event map was provided to students to inform them of the events going on around campus for the weekend celebration. The tradition was canceled after school administrators voiced concerns about House Party Weekend being too dangerous after 15 students were sent to the hospital with blood-alcohol content levels of 0.239 and above. The University President wrote a long essay canceling the event on August 1, 2013. 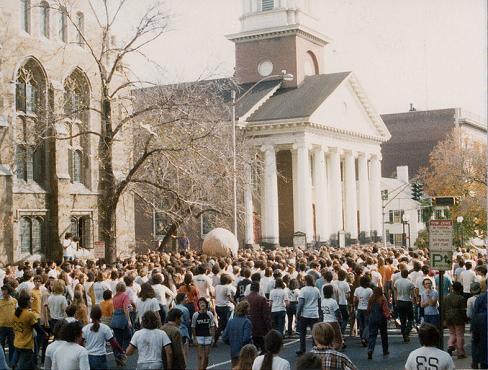 Bladderball was a game traditionally played by Yale students between 1954 and 1982. An event that typically preceded the Yale-Dartmouth football game, Bladderball involved rolling a 6-foot inflatable ball onto Yale's Old Campus where teams from each residential college would fight for possession of the ball. Teams were allowed to use any means necessary to seize control of the ball, leading to a vicious free-for-all that often spilled into the streets surrounding the campus. In 1982, several participants were injured during Bladderball giving Yale President A. Bartlett Giamatti reason to put an end to the tradition after a toll of minor injuries, property damage, near riots, and crazy pranks surrounding the tradition were too much to bear. A revival game was played in 2009 and briefly in 2011.

The Nude Olympics were, at a time, Princeton’s most popular tradition. Every year at midnight during the first snowfall, sophomores would streak around the courtyard of Holder Hall while the rest of the Princeton student body cheered them on. 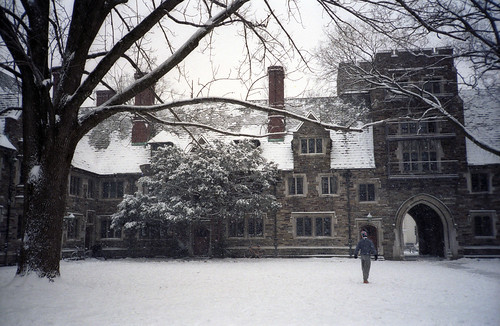 The Nude Olympics started in the early 1970s and became a school tradition for nearly 30 years. In the beginning, the Olympics included a 60-yard dash, a wheelbarrow race, and a three-legged relay. It eventually transformed into running a few laps around the courtyard.

The nationwide streaking craze in 1974 heightened interest of the spectacle. Participation grew into the hundreds and by the 1980s the event started to garner national media attention. Many outside spectators began making their way to campus, along with photographers and camera crews seeking to capture the event.

Alcohol intake before the event was common and became a concern to the administration after the 1999 Nude Olympics, when 10 students required medical attention for alcohol consumption and injuries. University President Harold T. Shapiro suggested that the Nude Olympics be stopped before someone dies.

Following this recommendation a Committee on the Nude Olympics was established to “study the tradition” for two months. The committee found that it was the “combination of alcohol, the mob behavior, the nudity, the wet and cold, the slippery and icy conditions” that constituted the problem. Because of these safety issues the Board of Trustees voted to ban the tradition in April of 1999 out of concern for student health and potential liability. Any Princeton student who chooses to partake in the Nude Olympics now faces a one-year suspension.

For many years, Duke Tailgate was a bigger deal than the football game itself. This wasn’t your typical tailgate; the event turned into a parking lot costume party with music, plenty of beer and thousands of students. It gave Greek and non-Greek students a place to mingle and blow off steam together, something much needed for class unity at a private school with around 15,000 students.

Administrators tried regulating Tailgate with certain restrictions for a few years before ultimately banning it. Tailgate was canceled in the fall of 2010 after a minor was found passed out in a Porta-Potty following the Tailgate for Duke’s victory over Virginia. 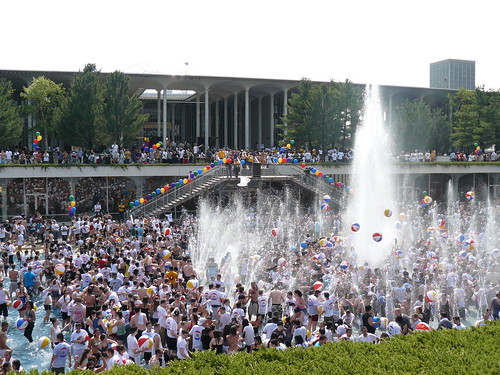 Fountain Day is the much anticipated day of spring at UAlbany when the large fountain on campus gets turned on. Students come together in a spirited celebration at the center of the fountain as the water begins to flow. Fountain Day often included free food, music, games and t-shirts for attendees. In 2010 roughly 8,000 students attended Fountain Day, tossing beach balls and dancing to music in the fountain by musical guest Flo Rida.

Fountain Day was last officially celebrated in 2010 as the fountain has been under construction and the administration has urged students to come up with another tradition. You may remember the wild Kegs and Eggs party that initially got this tradition canceled. Students got a little too crazy on St. Patrick’s Day in 2011 and in response the upcoming Fountain Day was suspended.

One student, who had heard the tradition was "the funnest thing to do on campus," applied to the school because of Fountain Day, only to have it canceled before she could experience it. With no Fountain Day celebration over the past few years (due to administration ban and construction on the fountain), it's up to UAlbany students to revive this tradition back to glory.