The 5 Biggest College Sports Scandals of All Time

The American way can be summed up in many ways, expressions, and thoughts, but the one thing that will always remain is victory. The strive for dominance can be traced back to the beginning of our civilization. Victory brings us joy, happiness, and a sense of fulfillment, but at what cost?

The lengths of winning takes hard work and dedication, and can bring together an entire community, state, or even nation. Unfortunately, there are some individuals who will take winning a little too far. After careful research and analysis we have assembled the top 5 scandals in college sports history.

Under coach Clem Haskins, the UM basketball program was turned around into a very successful program in a very short period of time. However, this came at a price. In 1999, the day before the Gophers were to start their quest at the NCAA Tournament against Gonzaga, the academic scandal came to surface.

Jan Gangelhoff, a former UM office manager, admitted to writing over 400 term papers for at least 20 men’s basketball players over the years. The program immediately suspended 4 players before the Gonzaga game. As a result, the Gophers lost in the first round.

The players had systematically committed academic fraud year after year, tarnishing many at the university, including most of the coaching staff, professors, advisors, and the team. The university was given many sanctions upon completion of an investigation by the NCAA, as well as an embarrassing blow to the school’s reputation. As a result, all awards and titles were stripped from the program between 1993 and 1998. They were also put on probation for 4 years starting the 1999-2000 season and lost 5 scholarships over the next three seasons. Haskins came out after he was dismissed in 2000 and admitted to paying Gangelhoff $3,000 for the work. The Gophers were a basket away from the Final Four just 3 years before this debacle.

Our Take: This story was somewhat over shadowed by the NCAA Tournament at the time, but is a lesson that some will do whatever it takes to win, despite the consequences. The Gophers men’s basketball program has never fully recovered from this embarrassment. This is happening all to often in not only college basketball, but all over collegiate athletics. The rules established by the NCAA are there for a reason. This is a very serious infraction because these kind of actions aren’t helping the student/athlete, community, or making a positive role on the youth. 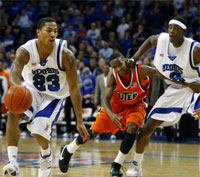 The final verdict so to speak is still out on this roller coaster. After recording a NCAA record in wins (38) for men’s basketball in 2007-08, allegations arose surrounding the Memphis program. An undisclosed player was accused of having another person take his SAT in Detroit so he could become eligible as a freshman, after failing the ACT three times. The wins were taken away from the Tigers because they were using an academically ineligible player. Memphis president Shirley Raines appealed the ruling claiming it to be an unfair penalty. She was quoted as saying, “We Know the Rules” .

The speculated ineligible player used was Derrick Rose, now a starting point guard for the Chicago Bulls. Rose only played at Memphis for one year (in that 07-08 season), before going pro. This is a well documented case and was a big story for the media.

Former coach John Calipari seems to have left the program at the perfect time, as he accepted a new position as the coach of University of Kentucky at the end of the season. This is the second time Calipari has had wins and awards taken away from his team, the first of which was with the University of Massachusetts in 1996: The classic Camby/Kellogg team had their Final Four banner taken down.

Our Take: This is another trials and tribulations not only for the Tigers, but John Calipari as well. He has played it very laid back, but there could be more than what the surface shows. The fact that this has happened to two of his former teams is a red flag. With that in mind, how much trust can you really have for this guy? The faculty and administrators running these schools need to take control. The bottom line is if a player is ineligible, he’s exactly that. If an incoming player out of high school can’t make his test scores and grade requirements, what message are we sending the youth? That it’s OK to lie, cheat, or steal as long as you’re an athlete? If a graduating high school athlete doesn’t want to follow the NCAA rules in place, there are plenty of options, such as Community College, CBA, and other foreign leagues.

This scandal was definitely the headliner of the 90’s. Not since the Pete Rose era had something this drastic happened, but this was on the collegiate level which raised eyebrows all across the country. In 1993 Stevin “Hedake” Smith was one of college basketball’s best athletes as he dazzled crowds and piled up points almost effortlessly. Smith attended Arizona State University during this time and ended his career as one of ASU’s top all-time scorers.

The scheme was arranged by Benny Silman, who was a local student bookie. Smith’s motivation was a $10,000 gambling debt to Silman. Silman and his sports booking business got in contact with a group who had ties with the mob. Stevin Smith was not alone in this process as teammate Issac Burton was also a culprit in helping him fix games. The deal was very lucrative for Smith who received $20,000 per game. Issac Burton received $4,300 per game in the 2 games he participated.

The scheme was when ASU was the favorite to win a game, they would win by less than the (betting) line. The scheme was discovered when Nevada sports bookies noticed suspicious betting patterns on ASU games. The casinos notified the Pac-10 Conference administration and an investigation took place. The case went to trial and 6 convictions were given. Among those, Benny Silman got the most severe sentence: 46 months in prison and a $250,000 fine. Stevin “Hedake” Smith received one year in prison, three years probation, and a $8,000 fine.

Smith claimed, after the fact, during an interview that he made more defensive mistakes rather than offensive. His nickname ,“Hedake” was given to him because it was rumored he would give defenses a headache when he handled the basketball on offense. After his conviction, it’s safe to say Smith had a headache of his own.

Our Take: This is a true tragedy of a collegiate star who had it all but simply threw it away for a quick buck. He should be playing in the NBA (or retired from), but one idiotic decision cost him his dream and future. There haven’t been too many other findings of sports gambling scams since this incident. This is a classic example of how greed gets a person nowhere.

The SMU Mustangs had one of the most prominent programs in college football. A history that included national titles in 1935 and 1982, 10 Conference titles, and 11 Bowl appearances. Their historic program included names such as Eric Dickerson and legendary Heisman trophy winner Doak Walker.

As a smaller school, SMU found it hard to compete with larger schools when it came to recruiting the nations top players out of high school. They had to do something to continue the success of the program, so they began walking the ethical line in the recruitment of their players.

In June of 1986, a tip was revealed about a David Stanley, who played Linebacker from 1983 to 1984. Stanley claimed that SMU athletic officials paid him $25,000 to sign with the team and continued paying him while he played on the squad. It should also be known that SMU was also on probation at the time.

After an investigation was completed, it was found that 13 players received $61,000 in payments from 1985-1986. This was known as a “slush fund”, in which boosters were paying cash to players to get them committed to play at SMU. The Southern Methodist Mustangs were punished severely for violating numerous NCAA rules and regulations. The NCAA gave the university a “Death Penalty”, in which it cancelled SMU’s entire 1987 scheduled games. SMU didn’t participate in the 1988 season either, due to the magnitude of their situation. This still reigns as the most severe penalty handed down to a Division-I program ever.

Every SMU player was granted a full release from the team in 1988 and were allowed to transfer to another school. 250 recruiters from 80 schools came on campus to recruit the former SMU players.

Our Take: This is rather unknown for most college students today, but it seems the NCAA was making an example out of this program. The Mustangs have never recovered from this scandal, especially in athletics. Most would ask why go to SMU, when Texas, Texas A&M, and Texas Tech are in the area. It’s hard to consume the fact that the school didn’t play college football for two whole years after the incident. No college or university would want to have this devastation to bear with, especially with the amount of revenue college sports teams bring in for their school. Bribery is a very serious issue, not only in college sports, but for students as well.

In the late 1940’s and early 1950’s there was a thriving basketball scene in the New York City area. In 1950, the City College of New York, one of the nation’s top basketball programs at that time, became the first and only team to win both the NCAA and NIT championships in the same year. It was a great time for basketball in New York, however, soon after, a great downfall would begin.

The initial arrests uncovered a widespread scheme of fixing games for betting purposes. Many top players and teams were invloved, including CCNY, Manhattan College, NYU, Long Island University, Bradley, Kentucky, and the University of Toledo. The players accepted payoffs from gamblers and in return they wouldn’t allow their teams to cover the point spread. In all, 33 players were involved, as well as members of organized crime groups, with fixing 86 games between 1947 and 1950.

Eventually City College of New York was banned from Madison Square Garden. The NCAA tournament was moved away from the NYC area for fear of a repetitive occurrence happening. The NCAA tournament championship game left the New York area for nearly 50 years, until 1996 when games were played at East Rutherford, New Jersey. The NIT, however was the more sought after tournament in that era. Many believe the scandal is a huge reason why the NCAA tournament is where it is today, and vice versa for the NIT.

Our Take: This was the first really big altercation since possibly the Black Sox era. It marked the first major debacle in college sports as well. There must have been some serious connections if 7 teams and 33 players were in on it. It makes one wonder, what if that happened in our era? How would the NCAA handle it, and who would be held accountable?

In closing, that was the Top 5 College Sports Scandals of all-time (in our opinion). Why must a player, coach, or whomever feel justified to take the easy way out (or so they thought) in competition? It seems every decade going back to the 1950’s has a scandal to go along with it, and about every decade another scandal will surface. What will be the post-2010 scheme? In competition, and in sports for that matter, there seems to be a constant case: some will cheat to win, but will not win in the end. As the saying goes: cheaters never prosper.