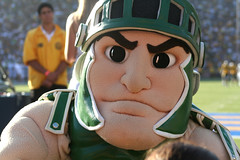 They entertain crowds with their school spirit and antics. They pump up fans loud enough to help sway momentum in their team’s favor. They pose for thousands of fan photos. But what else goes on in the secret world of a mascot?

Here we take an inside look at some things you might not know and see just what it’s like to be a college mascot.

It's gross: anytime you’re in a mascot costume, you can expect to be sweaty, stinky and just feel nasty. The suit is made out of heavy material so the temperature inside gets a good 20-30 degrees warmer than the surrounding environment. This leads to horrid conditions inside. It’s possible to lose up to 10 pounds of body weight in sweat during a game. Any clothes worn under the suit typically get soaked all the way through.

Being a mascot may be fun, but it’s not easy. You run out of energy very quickly when it’s hot and you’re lugging around a 25-pound costume. It gets dry-cleaned regularly, but when you sweat that much into an air-constricted suit there is no way it's going to smell good. The best way to describe it is to think of a bad mix of BO and Febreze.

2. Mascots get a full-ride scholarship

Some will and some won't, but most Division 1 mascots get a full-ride scholarship. It largely depends on how prominent the athletic program is. Even the smaller schools will cover a large percentage of tuition.

3. They get excessive perks to the job

Mascots not only get to hang out and party with the cheerleaders, they get access to other perks as well. NCAA athletes get treated like kings. Since the mascot travels with the cheer team, they get treated the same way. We’re talking chartered jets to and from tournaments, fancy hotels, free food and meal stipends, and lots of free clothes and team gear. The athletic department spends more money than you think.

4. They go to Mascot Camp

Mascots go to summer camp. Schools will send mascots to these training camps to prepare and develop mascots for the coming year. Mascot camp is a 1-2 week summer program where students from all over the nation go to learn mascot skills. Apparently this is a time where mascots like to go crazy and party as well.

“I hear that when the B1G has their meet up of cheerleaders and mascots, it gets pretty insane.” – former college mascot

“The best part of mascot camp was playing dodgeball in costume with all of the other mascots.” - Mascot camp attendee

5. Most Mascot Fights are Pre-Planned

Most mascot fights you see are orchestrated. Before a game, mascots will get together and plan out mini-skits with the intention of entertaining the crowd. Sometimes mascots will have to share changing rooms and while hanging out during this time some like to arrange a “fight” to get both fan bases fired up. An actual fight would lead to the student being kicked off the mascot team, banned from all athletic events, and possibly suspended.

Not planned: fights started by the Oregon Duck and the Ohio Bobcat.

6. The worst time to perform is when hungover

The worst time to wear the suit and have to perform is when you are experiencing a hangover from the night before. While mascots aren’t allowed to go to parties with the suit on, they still roll with a crowd that likes to have a good time.

When you are hungover, you are dehydrated and considering how much you sweat while wearing the costume, your body loses more water. This just leads to more problems and amplifies the hangover. It gets so bad, you nearly pass out.

“My school is a big party school so I've had to make a lot of miserable appearance real hungover. Those are the worst.” – former college mascot 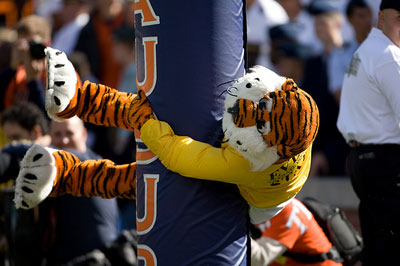 7. There are multiple mascots at your school

Mascots carry a demanding schedule. It’s a very time-consuming job. Mascots do more than just sporting events as there are many off-the-field requirements at special events both on and off campus. You can even hire the mascot to perform at your next event: weddings, parties, etc. Sometimes mascots are even hired to work with psychologists to help children overcome fear of costume characters.

There’s no way a single student could carry the responsibility of all these mandatory events, therefore, some schools will have 4 or 5 students on the mascot squad. All members of the mascot squad share the same suit (Mascot suits are expensive). One mascot costume can even be shared by up to five people on the same day! (This really adds to the smell factor. Think of multiple sweaty dudes sharing the same suit on game day…or don’t.)

8. They strictly maintain a secret identity

The college and mascot squad go to great lengths to keep the mascot’s identity secret. Sometimes only the closest of friends know (sometimes not even them). Students who mascot on game day usually have to resort to lying to their classmates on why they can’t make the game by saying they are an athletic intern or manager rather than reveal their true identity as the mascot.

Some mascots will end up revealing their identity at graduation by wearing some part of the costume at commencement. For example, at Virginia Tech, the Hokie Bird reveals his or her identity by wearing the Hokie feet at the graduation ceremony.

9. Going to the bathroom isn’t a problem

Mascots have to drink a lot of water to stay hydrated in the sweltering suit. While performing as a mascot, you would think that a trip to the bathroom would be difficult. Actually the costume makes you sweat so much that you just sweat it right out, so a trip to the bathroom while wearing the suit isn’t a problem. (You just wait until halftime.) It takes some time because they typically have to take the costume off.

"I'll go through three bottles of water and not have to pee once. You just sweat it all out."

10. They always have to be moving

Mascots are told they always need to be doing something because someone is always watching during games. “Even when you’re resting, if you’re standing doing nothing you’re breaking character,” says a former mascot. So much for getting a break in that large, big-headed, sweat-drenched suit.