Fort Lauderdale: The Rise and Fall of a Spring Break Capital

It all started back in 1935, when a swim team traveled down to Fort Lauderdale to make use of their Olympic-size pool in an effort to stay in shape over winter break. When the swimmers from Colgate University returned tanned and in shape, word spread of the Florida hotspot. The city, seeing a marketing opportunity, created a College Coaches' Swim Forum attracting college coaches and their swim teams from all across the county. 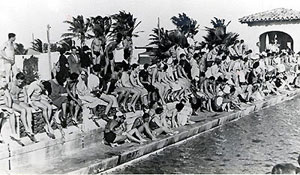 The thought of spring break in Fort Lauderdale received further attention with the 1960 film Where the Boys Are. The film was aimed at the teen market, featuring sun, sand and sex.

The debauchery of spring break was further publicized with the airing of MTV's first spring break special in 1986 (at Daytona Beach). The broadcast reinforced spring break's reputation for beaches, beer and bikinis.

Spring break in Fort Lauderdale peaked in 1985 when over 350,000 students traveled to the area over the span of a few weeks. Things got pretty wild as students packed themselves into hotel rooms and coeds participated in bikini and banana eating contests.

At that point the city had seen enough. Streets were reconfigured to discourage cruising, strict laws against public drinking were enacted, and the mayor went on ABC's Good Morning America to declare that students were no longer welcome to Fort Lauderdale.

The banning of alcohol on the beach meant more people did a lot of their drinking in hotel rooms, which led to drunken antics such as jumping from hotel balcony to balcony, as well as diving into the pool below. Spring breakers who once got drunk and passed out in the sand were now getting drunk and falling off balconies, sometimes even leading to deaths.

After the anti-spring break laws were passed, the number of arrests doubled the following year. As the number of college visitors dwindled, bar owners and retailers, who loved the additional business that spring break provided, complained of business being down. The raising of the drinking age to 21 also had an impact, as younger party-goers took the party down to Mexico with its lower drinking age.

Back in the day, the majority of hotels in Fort Lauderdale were independently and locally owned. Now hotel brands such as the Ritz-Carlton, Westin, Hyatt, Marriott, and Hilton can be seen across the skyline. The city gave way to big corporations with their "chic" 4 and 5 star resorts, paying no mind to the little guy: the small business owner. Some hotels now won't even rent out rooms to those under 25.

As a result, spring breakers traveled elsewhere to the more welcoming destinations of Panama City Beach and across international borders to Mexico. Cities in Mexico became inviting to college students with the fact that the legal drinking age is 18.

A city that was once visited by some 350,000 college students, saw only 10,000 spring breakers in 2006, all as a result of the city's effort to shed its image as a spring break destination. Considering the average student spends $1100 on spring break, one can see the huge loss in revenue that is generated during those few weeks. Now much of this revenue is going to other places like Cancun and Acapulco that embrace the spring break culture. 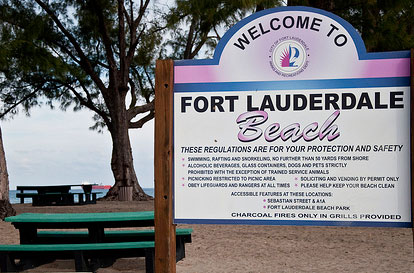 Broward County, with its largest city being Fort Lauderdale, led the nation with a 73.7% increase in vacant retail space in 2008. This is on top of an already troubled housing market. This reduction in revenue from retail is taking its toll on city and state budgets. Now, as Florida faces its highest unemployment rate on record, Southwest is cutting flights from Fort Lauderdale, and even the new Trump International condo faces foreclosure. The city is now resorting to red-light cameras in an effort to increase revenue.

Here is a tame look at a Fort Lauderdale Spring Break in 1985: