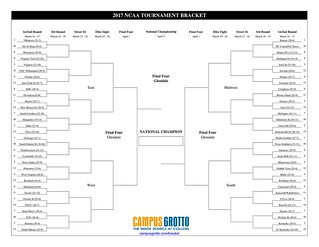 March Madness is officially among us as we enter into one of the greatest showings of school spirit found in the college scene: The NCAA Men's Basketball Tournament. Across the country, teams from 68 schools have been placed into the 2018 NCAA tournament bracket. If you're one of over 40 million Americans who will be filling out a bracket this year, download and print your bracket and follow along all the action that we come to love in March.

This year's #1 seeds go to Virginia, Villanova, Kansas and Xavier with the National Championship being played on April 2nd in San Antonio, Texas.