A little competition is good now and then. However, the competition that goes on between Harvard and Yale is far from little. From football games, academics, pranks and Harvard/Yale jokes, this rivalry is far from over.

Harvard and Yale are both historic colleges that have been around for a long time, which is another reason to this somewhat friendly and fierce battle of Ivy League schools.

Both are very prestigious schools and both think they're better than each other. They both have secret societies such as Skull and Bones and have a history of Presidents and other leaders of America. Both are highly respectable colleges that are almost always named in the yearly list of best colleges in college rankings year after year. What makes them prestigious is how elite they are, as they are a couple of the hardest schools to get into period.

The most well known Harvard Yale prank was when Yale students dressed as Harvard Pep Staff at a Harvard vs. Yale football game and handed out call letters to fans sitting in the Harvard section. When it can time to hold up these cards, what spelled out was “We Suck”. 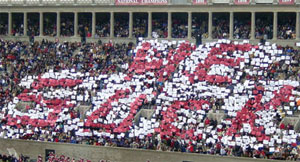 Now there have been many instances of misconduct between the two schools, some so inappropriate that they can’t even be mentioned in this article.

When it comes to pranks, it's always a matter of who can out smart or one up the other, as seen in the "We Suck" prank. After each prank, pranksters always want to be better than the previous prank; a true test of wit, humor and skill on a different level if you will. Some of the thought that goes behind this stuff is pretty interesting, as these are pretty smart people. Of course, some pranks are just plain stupid.

Pranks between Harvard and Yale students date back to the establishment of the two colleges when pranks used to get so serious that small explosives were even used on living quarters. While something that serious would never be tolerated these days, pranksters should think of something both legal and witty at the same time.

Harvard and Yale aren't really known for being that great of football teams, but it's the somewhat friendly rivalry that makes this competition a lot of fun, and that means a lot in sports.

The atmosphere at these kind of events makes even the normal bystander feel as if they are a part of the big rivalry. Want to see for yourself, attend a Harvard vs. Yale football game.